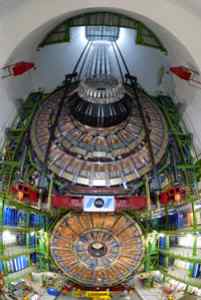 there is no 'god particle' as god doesn't exist

Scientists are after the discovery of the Higgs Boson, a massive and still hypothetical elementary particle. The place is the Large Hadron Collider at CERN, the European Centre for Nuclear Research, one of the largest laboratories in the world. The cost is 9 billion dollars.

Here the protons are accelerated to speeds very close to the speed of light to gain massive energies for massive smashing experiments. The hope is, if the models are correct, that such energies will release the Higgs Bosons and make them detectable. The Higgs Boson is so fundamental to particle physics and to matter composing the universe itself that some people, including some scientists, have been tempted to refer to it as the "God Particle." Other scientists find such characterization vulgar, superstitious, or just an annoying popularization ploy.
Out of respect for the atheists who are a vast majority amongst the scientists, RAEL stated that they should call it only the ‘Higgs boson’, its scientific name.

The concept of "God" has no meaning in any field of Science. Its use can only prolong confusion and hinder understanding of the universe in a rational and scientific manner. It also can only retard science education attempts on the part of scientists and other educators.

The Large Hadron Collider instrument at CERN has now been turned on and preliminary tests are running but the first collision experiment will not be performed until October 21. In August 2004, the Elohim, those who created all life on Earth according to the Raelian philosophy, send a warning message to Rael stating that although fusion experiments are safe, we must not engage in collision experiments that destroy and disintegrate elementary particles as they contain infinitely small universes containing life and civilizations.

On hearing about these new experiments at CERN, RAEL stated, "We must remember that this kind of experimentation while not dangerous for humanity should not take place because it destroys many forms of life in the infinitely small universes composing the matter we know."

In 2004, in an open letter to the World's physicists, the Association of Raelian Scientists warned the scientific community of this danger.
Over the last few years since then, we have seen opposition to such experiments growing. We hope scientists will pay attention.