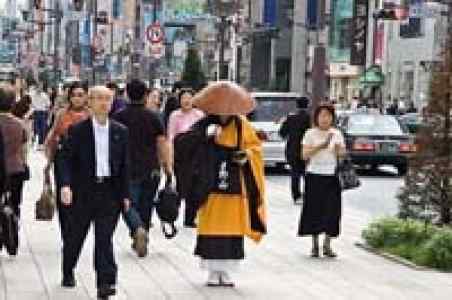 A new technology is on the almost immediate horizon which would allow cameras to spot “lost or suspicious” people. The developers of the geo-referencing software are designing it in order to spot suspicious activity which they claim will be possible even in the most crowded cities or terminal.

But exactly what is suspicious behavior? The Prophet Rael commented:

“This is a terrible system of big brother normalization - not a system for spotting anybody behaving ‘normally’ like robots, or like ‘normal’ stupid people whose life is only ‘work, eat, and sleep’ but those behaving differently than the flock of unconscious sheep. It certainly won’t hinder ‘terrorists’ since they will easily learn how to trick this system by behaving exactly like ‘normal’ people. So this technology does nothing to ‘protect’ as they are claiming."

He went on to say "It would be fun to send hundreds of Raelians to these areas with these cameras, walking like the very slow conscious walking of the Zen Buddhist monks, (whose walk is a beautiful meditation/prayer) who would certainly be spotted as ‘suspicious’ by the system. Then the system would detect hundreds of people behaving ‘abnormally’. So what? Will it jam the system or will the police harass people walking differently? Will the next step be laws forcing people to walk ‘normally’ at a certain speed? That would be the end of freedom. This is a perfect example of a bad use of technology.”

The Prophet Rael has pointed out before that there’s nothing wrong with surveillance as long as it’s not used to take away freedoms. Many freedoms have been already removed in the name of “security”. Rael has taught for many years that any sense of security is always an illusion. With all the security checkpoints, X-Ray machines etc., 19 men with box cutters attacked the US. And the response was “more security” which has only succeeded in decreasing freedoms and not increasing safety at all.