T-shirts for freedom of expression

enter the best T-shirt contest ever 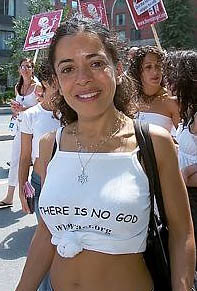 Our support was expressed this week to the President of the Polish Committee of the International Helsinki Federation for Human Rights, Marek Antoni Nowicki, who had to cancel a film festival on freedom of expression on the campus of the University UMCS of Lublin, following the decision of the President of the University to forbid a T-shirt exhibition associated to it. The T-shirts exposed had provocative slogans written on them like I didn't cry after the death of the pope, or I am gay, I have AIDS, I am Jewish, I am Muslim, I masturbate, I have my period.
The President of the University justified his decision saying that "The exhibition and the printed texts could have offended the feelings and the beliefs of numerous people". Of course the Catholic Church supported him. The bishop of Lublin was reported saying: “One must have lost all Human feelings to write on a Tshirt " I have AIDS" or " I had an abortion"”. 
Such an attitude is of course unacceptable regarding freedom of expression….