A strong advocate of the freedom of Muslim women 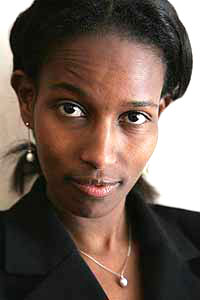 The Prophet Rael awarded Ayaan Hirsi Ali the title of Honorary Guide last week. Born in Somalia, Ayaan Hirsi Ali left her country at 22 to escape from an arranged marriage. She found refuge in Netherlands where she adopted the local liberal values and even became an elected representative. Being a strong advocate of the freedom of Muslim women, against the Islamic doctrine, she became a target of Islamic groups and has now to hide and stay with body guards all the time. The movie director, Theo Van Gogh, who coauthored « Soumission » with her, was killed by this group on November 2004 and the Dutch Justice confirmed that she is under serious threat from that group.
More..
Search Raelianews
News Categories
Other News
‹ ›