Buddhism without Mysticism is Raelianism

the Prophet Rael fulfills the prohecies 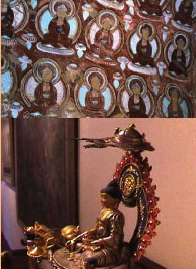 In 1997, the Elohim contacted the Prophet RAEL and provided him with additional teachings and clarifications of the Messages they had given him 24 years earlier. Including in this communication was the following:
Buddhism is achieving more and more success on the Earth and that is a good thing because it is seeking balance between science and spirit and is therefore the closest religion to the truth for the people of the new era. If we took away the mystical importance of the past in Buddhism, it would become Raelianism. More and more Buddhists are likely to become Raelians.
Since then, many Buddhists recognized the Prophet Rael as the Maitreya, the new Buddha from the West. Some of them gathered evidences that the Prophet RAEL fulfills the old Buddha prophecies. If you want to know more about it, you can listen to two reports posted on www.Raelradio.net under the titles “Calling all Buddhists” and “A tale of two newspapers in Thailand”. Hope you enjoy them.
Click here