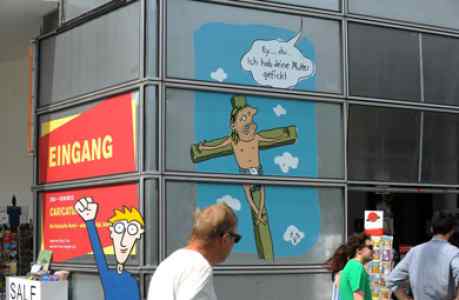 The caricature museum of the German city of Kassel made the headlines with a controversial cartoon hanging in its window, depicting Jesus on the cross.
The caricature depicts Jesus in agony on the cross as a voice calls down from heaven, "Hey, you. I fucked your mother."
Several Christian leaders have protested against the drawing and asked it to be removed. Museum head Martin Sonntag has simply refused to remove the poster.

Rael expressed his full support to the Caricature Museum saying that the Christian leaders reaction is just stupid.
“First of all the name 'Jesus' is not written anywhere on the cartoon; secondly nobody knows exactly what Jesus looked like – this applies to Mohamed caricatures as well-; and thirdly the fact to represent somebody on a cross also doesn't mean it represents Jesus as thousands of peoples were crucified at the time of Jesus, - before and after his time as well as it was a very common way of executing people, mostly criminals. Last but not least : they were using wood assembled in the shape of a T and not a cross as it takes way too much work to make a cross."
During the Mohamed's caricature debate a few years ago, Rael has encouraged artists to do as many caricatures of anyone including himself, without censoring themselves. We should be able to laugh about everything, including ourselves.