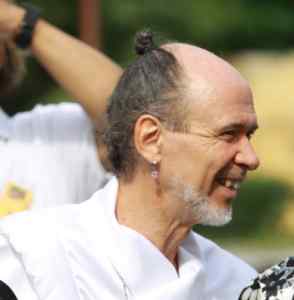 This is what Rael has been teaching for the past 38 years: Happiness is a decision and you can activate your happiness center at will through meditation.
All Raelians have measured the benefits of their daily meditation regimen in their overall well being and scientific researches have confirmed over the past 10 years that meditation induces functional changes in the brain of the practitioners.
Richard Davidson at the Laboratory for Affective Neuroscience, UW-Madison is one of the pioneers in that domain and his studies on the brain of a group of Tibetan monks who had practiced meditation for a minimum of 10,000 hours have shown the differences between the monk's brains and a 'normal' brain.
Neurobiologist Sara Lazar from the Massachusetts General Hospital, has also been looking at how the practice of yoga and meditation affect emotions and cognitive performance and found a significant activity in the prefrontal cortex as well as the insula — a region near the frontal portion of the brain — of long-term meditators who participated in a 1-week intensive meditation retreat.
All these researchers actually report a greater activation of the left prefrontal brain compared to the right part of the brain during meditation, and more so when the meditation focused on loving-kindness and compassion.
It is also commonly accepted that positive emotions are associated with a greater activity in the left prefrontal region, while negative emotions are linked to a greater activity in the right prefrontal cortex.
Based on the principle that meditation brings about a state of well being, it was reasonable to expect to see a greater activity in the left prefrontal cortex among meditation practitioners compared to non-practitioners.
Some studies using brain imaging techniques like the single photon emission computed tomography, or SPECT, or Infrared Spectroscopy, IR, have shown that during meditation the blood flow increases in the prefrontal regions, and more specifically, the left prefrontal region. However most of these studies have measured the brain activity at rest and during meditation and compare the results under these two conditions. To our knowledge, no research has been conducted to determine if it is possible to stimulate the blood flow at will in the left prefrontal region during meditation.

What Maitreya Rael is however saying is that it is possible to target the left prefrontal region of our brain and increase the blood flow there and thus the activity of this region and the positive emotions associated to it.

This is how he formulates this meditation exercise: “Concentrate on your brain’s power and strength and its exceptional ability to harmonize itself and to choose happiness, by visualizing the blood flow and the heat that is created in the left frontal region, where happiness lies.”