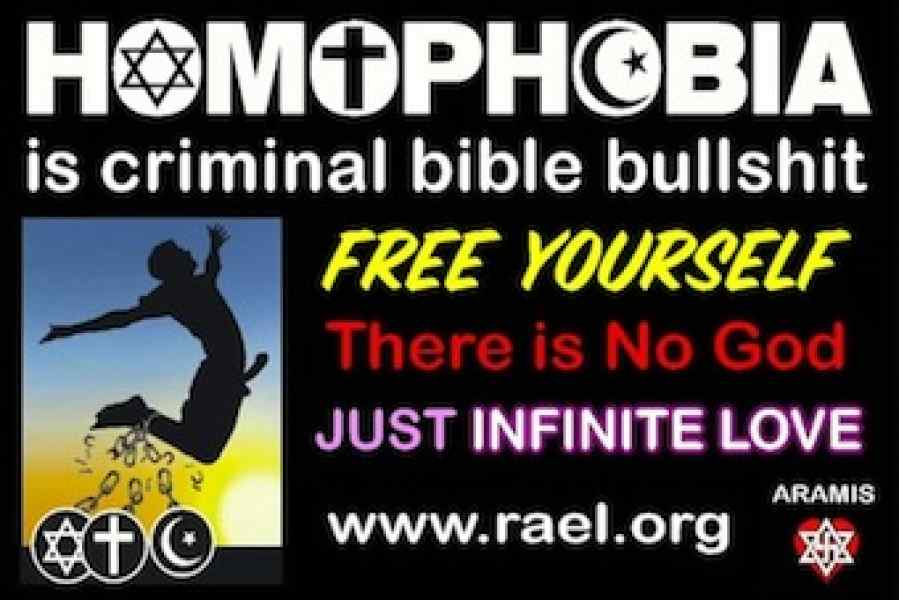 Roberts said the Raelian Movement understands that the Bible “has been manipulated by vested human interests and needs to be censored to remove the lies and hateful passages.” But he said Raelians respect other Biblical passages that detail contact with the Elohim, a race of extraterrestrial scientists mistaken for gods by our ancestors. Raelian philosophy teaches that the Elohim “made humans in their own image and after their own likeness.”

Raelians also respect Christ as one of the great prophets, along with Buddha, Moses and Mohammed.

“More than ever, we must speak out and prevent religious lobbying and prejudice masquerading as political correctness,” Roberts said. “We must show that those with this agenda are putting undue pressure on Mardi Gras. And most of all, we need to ask, ‘Now that you know, what can you do about it?’ With that in mind, we’re asking those with floats in this parade to highlight religious homophobia by displaying our message.

And we’re also looking for people prepared to hang the “banned banner” on their buildings and/or in window spaces along the parade route, particularly at Oxford and Flinders Streets, or on their floats during the Mardi Gras Parade. We ask the community to assist us in getting this message out by promoting it freely and openly!”

Please help! ARAMIS (the Raelian Association of Sexual Minorities) has put out a call to all who wish to spread our message: HOMOPHOBIA IS CRIMINAL, BIBLE BULLSHIT. Please write to @ or see www.raeliangay.org.