Debaptisation ceremonies with pope Alice, a piece of art and a lot of fun 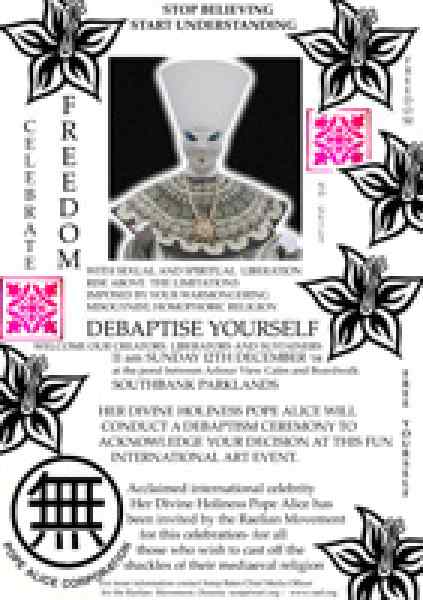 The Southbank Parklands Debaptism Ceremony poster for the Australian Raelian action in December 2004 wil be included in an important upcoming exhibition in Brisbane.
Griffith Artworks, Griffith University and the State Library of Queensland are presenting an exhibition of political posters from the 1970s to the present day.

The exhibition, entitled 'Zootopia: posters from the urban jungle' will be at the Dell Gallery, Qld College of Art, Griffith University, Southbank, Brisbane from 2 April - 22 May 2005. There will be an opening event on Sat 9 April.

Luke Roberts, also known as Pope Alice, has donated two copies of the poster signed by HDH Pope Alice in appreciation, to go into the permanent collections of Griffith Artworks and the State Library of Queensland. Both collections are significant Australian collections.

The debaptization campaign conducted worldwide by the different national raelian movements over the past 12 months has been a great success with several thousands apostasy letters sent to the Catholic church and others by homosexuals, women, people who have been denied their differences for too long and didn�t want to be counted as Christians anymore, even if they still love the messages given by Jesus. It was also the occasion of much fun for the raelian members in the streets.