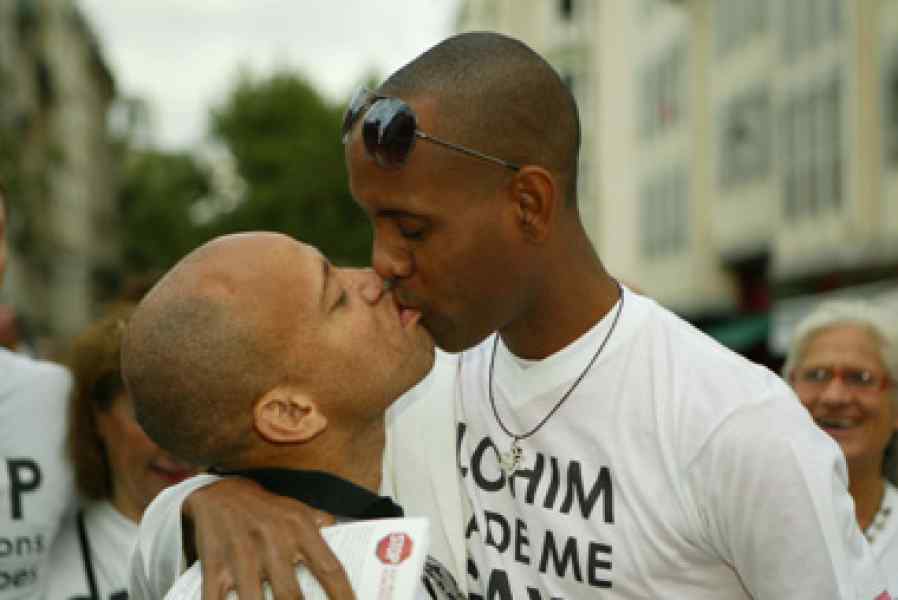 Initially the event was meant to take place at the Plaza de Armas of Lima where the Presidential Palace and the Catholic Cathedral of Lima are located, but the Peruvian President Ollanta Humala had ordered the police to close every access to the Plaza de Armas with fences and even with a tank that threw dirty water, so that no lesbian, gay, bisexual or transsexual or heterosexual supporters (LGBT) could enter, though any other people could!

« That was a clear message of discrimination from President Humala, who initially got votes from the LGBT community for his supposed support to them. » explains the Latin American Aramis leader Erich Rever.

The event gathered a large crowd, including LGBT and heterosexuals supporters who shouted proudly:
"We are not anymore afraid", "Kisses are love","Our rights must be respected like the rights of anybody else".

As the event kept going with the main entrance still blocked by the police, the Homosexual Movement of Lima succeeded to have an access through another entrance and mobilized everyone there. Once there the police had time to also block that access with fences, but some LGBT people had entered through the police security passing like "normal" civilians and begun kissing on the other side of the fence! It was a victory for the LGBT, but after some minutes the police started to use force to remove them from there.
The LGBT community in the other side pushed the fence to pass through it to prevent any harm from happening to the LGBT members and that prompted the police to bring again the tank that threw pressured dirty water.

Even though Aramis leader, Erich Rever, was not pushing the fence, the water struck all over him, leaving his skin and clothes all wet and dirty. All the LGBT community went backwards as the tank continued throwing dirty water and the police started coming out from the fence with their sticks and shields ready to enforce any necessary measures.
The only one left in front was the ARAMIS Peru leader who decided to sit down, close his eyes and meditate by just sending peace and love towards the aggressive police men.
« It was beautiful, an undescribable sensation. » said Erich. « I didn't know if I was going to get hit by the police or taken to jail, I just relied on the power of love, which was the force that moved me to remain there confronting the violence that was coming towards me. I was focused on my meditation, just thinking of love and peace on Earth. I have been reminded that it was like the "1 minute for peace meditation" action launched by Maitreya Rael, though within a completely different circumstance. »

Erich was just meditating peacefully. They didn´t harm him, they didn´t touch him, they just passed by his side in silence. When he opened his eyes and stood up, he could see that the police got again to the other side of the fence and some LGBT members begun pushing again the fence and the police immediately answered by throwing a bomb of gas that irritates protesters eyes and nose and makes them cry. Everyone went away screaming to protect their sight and airways.
"It is incredible that we still live in such a primitive society today in the 21st century, where a kiss is so dangerous that it needs a presidential order to use policemen, fences, gas bombs and even tanks to protect a PUBLIC area from homosexual people wanting to express a fundamental human right, armed with only one weapon, a kiss of love!." said Rever
Today´s action brings to perspective how much still needs to be done to create the change that we need on our wonderful planet... but thanks to the teachings of the Elohim through Maitreya Rael, the ARAMIS members took the necessary steps in order to achieve it, by answering with love to violence...and it works!