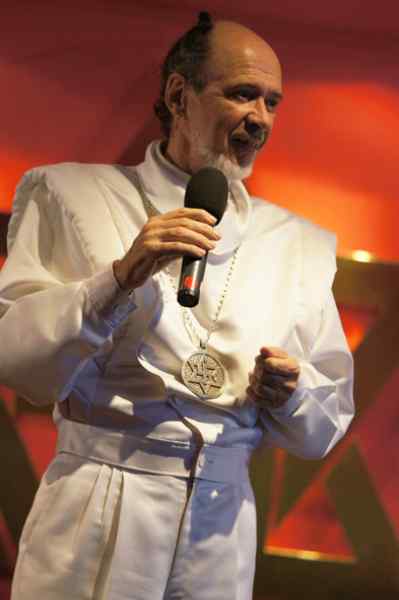 “It’s just giving ideas, and then everybody accepts,” he said. “This is the future, a world governed by the people. There will be no need for governments, so there will be no governments at all. People call this anarchy, thinking that if there is no government and no power, there would be complete chaos, with everything upside down. It’s not true!”

To illustrate why such thinking is false, Rael referred to the social structure of ants.

“Everybody says an ant population has one queen,” he said. “But we shouldn’t call that ant a queen. A queen is someone like the queen of England, who says, ‘Do this, do that.’ The ant queen just makes hundreds of eggs every day, and that’s all. She is just a vagina making hundreds of babies every day. She is not a queen because she has no power.”

He added that although ant colonies have no governments, everything works perfectly.

“In the social organization of ants, every ant works for the good of all,” he said. “Each ant does what is best for everybody. In the ant society, there are no police or military.
People say, ‘What if somebody is bad?’ Nobody is bad. When there is no power, when there are no police and no laws, natural law comes into play and everybody wants to be good for everybody else. Nobody can say this doesn’t work. Look at the ants. It works!”

Rael said colonies of ants, honey bees and wasps have no real king or queen and no laws. Each individual works for the good of all, and this happens without any government.

According to Rael, we actually don’t need these things, but those who have it want to keep them.

“Some people have power and the money and want more,” he explained. “They want everybody else to be slaves: to work, pay taxes, obey, and have no freedom. That’s what they want. But for themselves they want freedom, money and power. They want everything they want through corruption. And this is true everywhere. So the real revolution to come is a revolution that is not changing the government but destroying any form of government.”

In the future, humanity won’t need any government at all, Rael emphasized.

“Geniocracy, yes,” he said. “It’s good to have a group of geniuses, intelligent people thinking together about what kind of future humanity can have and presenting ideas that people can accept or not accept. But no power, because power destroys freedom, creates violence, creates poverty, creates hunger.”

He said that if the whole of humanity is like a big ant hive, then everybody should work for everybody else.

“Who wants to kill somebody?” he asked, and then answered the question:

“Only sick people do. They need a hospital; they need to be cured because they are sick. People who want to kill other people are sick; this is a medical fact. In fact, more and more doctors and scientists agree there’s a problem in the brain of people who are violent. And this violence is created by the society.”

Rael said it is society, the government and the laws that create sick people, who then kill other people.

“And then the government says, ‘You see, you need us, you need laws,’” he said.
“But this is completely wrong. With no more government, no more social pressure, no more police and just the natural law, who would want to kill somebody? Is there anybody here who wants to kill somebody? I don’t know of anyone who wants to kill somebody, except sick people. So we don’t need a law saying, ‘You must not kill.’ If there were no law saying, ‘You must not kill,’ would you kill somebody? No, nobody wants to kill. But they say, ‘You need a law to protect you.’ Remember, there is no law in the ant hive saying, ‘You must not kill.’ Yet they never kill each other. And when one ant brings food back to the hive, every other ant comes to help. Cooperation is the future of humanity, everybody working for the good of everybody, and without the most terrible poisons of humanity: governments, police and laws.”

Rael said that when humanity has destroyed governments, police and laws, this planet will be a paradise.

“Paradism will be in place then,” he said. “And under paradism there will no longer be any money, of course. Money is the fruit of power and government. Do you all have money in your pockets? Who is making this money? The governments are making it, and they use it to have power over you. Take one bill, whether it’s a Japanese yen, a dollar, or a Euro. What is it? Is it gold? Is it silver? No, it’s just a piece of paper. With such pieces of paper, you may say, ‘Wow, look, I’m very rich.’ But wait a minute; it’s only paper!
“Yes, but ‘one million dollars’ is written on it, you say. But I say, ‘Is that piece of paper worth one million dollars because that’s what is written on it? No. Because who wrote that? The government! So your money is only based on government lies! Put all your money in a box and how much is it worth? It’s worth only the weight of the paper, which is almost nothing! You may still believe in it, but in the future, and very soon, everyone will bring their money to public places and burn it all. We don’t need it if everybody works for the good of everybody else and everyone helps each other. The future of society is to do without money because money is only a poison given to you by the government.”

In conclusion, Rael explained what it means to be Raelian.

“Being Raelian means not only to be a Messenger of Infinity, a Messenger of the Elohim, but to be one of the most revolutionary people on earth,” he said. “That’s who you are. Speaking of love like a Buddhist monk saying 'Om' is not love. Love is changing society so that everyone has food and safety, so that no one is starving to death anymore. This is our planet, our world, and to be Raelian is to change it for a beautiful future. That’s why the Elohim need you. They gave us a Message not only to explain where we come from and why we are here, but to explain what a beautiful heaven we can create on this planet if we apply their teachings, which are: Destroy all power; destroy all governments; destroy money; and create one unified planet. That’s why the Elohim need you!”