for his stance against torture 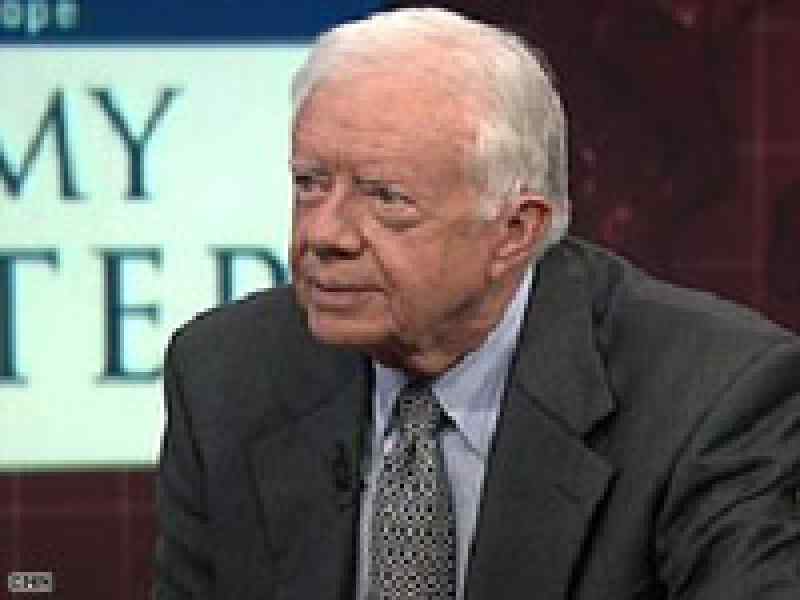 The United States tortures prisoners in violation of international law, former President Carter said Wednesday.
He also said that the U.S. "has abandoned the basic principle of human rights." "I don't think it. I know it," Carter told CNN's Wolf Blitzer.
"We've said that the Geneva Conventions do not apply to those people in Abu Ghraib prison and Guantanamo, and we've said we can torture prisoners and deprive them of an accusation of a crime to which they are accused." In an interview with the BBC, Carter called Vice President Dick Cheney “a disaster for our country” who exerts too much influence on the president.
Carter also said President Bush creates his own definition of human rights.

On October 4 an article in The New York Times confirmed Carter’s declarations disclosing the existence of secret Justice Department memorandums supporting the use of "harsh interrogation techniques." These include "head-slapping, simulated drowning and frigid temperatures," according to the Times.

Mr. Carter, who won a Nobel Peace Prize in 2002, also criticized Mr. Bush for having "zero peace talks" in Israel. Mr. Carter said the administration "abandoned or directly refuted" every negotiated nuclear arms agreement, as well as environmental efforts by other presidents.

For his recent stance against the torture authorized by the American government, and for his opposition to the policies of President George Bush, former President Jimmy Carter has been honored by the Raelian movement.

“For his courageous position of putting truth before politically correct nationalism, I decided to award Jimmy Carter the title of Honorary Guide,” said Rael.

He added that Carter’s extensive efforts to eradicate AIDS and other diseases in Africa, his many humanitarian projects, and his profound understanding of science and technology were other factors contributing to the honor.

“This is the sort of person who would be eligible to run as a candidate in the form of government Raelians want – a geniocracy, or government by a college of elected geniuses,” Rael explained. “Carter’s presidency was thwarted because he couldn’t get his policies through Congress, which unfortunately contains many people with mediocre minds. A group of geniuses democratically elected and governing collectively is what’s needed. In fact, it’s the only form of government that can save this planet.”

Trained in nuclear physics, Carter has one of the highest IQs of any American president, living or dead. He has written many books, one of which details his views on the compatability of science and spirituality. And along with liberal views and high regard for the truth, Carter has something else in common with Raelians: He believes in UFOs.

In fact, he freely admits publicly to seeing one himself. Several decades ago, long before he became president, Carter was waiting to give a speech at the Lion’s Club meeting in a small Georgian town when he happened to look up at the sky and see what he later described as “a self-luminous object, as bright as the moon.” He said the object was a silent blue disc that approached and receded, then repeated the cycle.

One of the very few American political figures to publicly admit to such a sighting while in office, Carter reported the incident to the International UFO Bureau in 1973, when he was Governor of Georgia. In his handwritten report, made a few years after the sighting, he said he observed the object for 10 to 12 minutes and that its color changed from blue to red. It “came close, moved away, came close, then moved away,” he wrote.