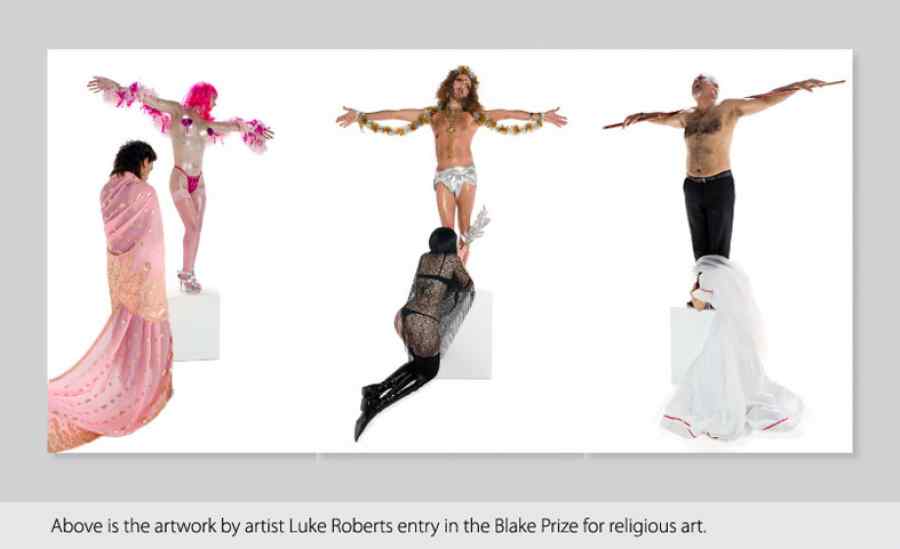 An artwork by artist Luke Roberts, who is a Level 4 Guide in Oceania, has been causing a sensation in Australia. Luke's triptych Three figures at the bases of crucifixions has been selected for entry in the Blake Prize for religious art. The Blake has two prizes that challenge artists and poets to investigate ideas and issues surrounding spiritual thought and religion in contemporary art and literature.

The initial selection of Luke's work has caused an uproar and anger amongst some Christians, who see it as a degradation of the image of Christ.
Headlines include Uproar over religious artwork and Christians angry over drag Christ art.

Luke says: "They are missing the point. The work is about Christ Consciousness, that higher mindedness of enlightenment, which is a path open to anyone regardless of his or her religious tradition".

The six figures in the artwork represent members of minority groups in real life. A gay man is the central figure being paid respect by a lesbian, with a gay Maori youth paying silent tribute to an intersex woman on the left and
an aboriginal man on the right supported by an indigenous bride.

"In placing the three main figures on plinths I'm indicating their journey to an elevated consciousness. I'm presenting them in a heroic manner to show their triumph over adversity and at the same time underlining the suffering they've incurred as members of sexual and racial minorities."

The central ChristIlike figure is played by Tobin Saunders, a well known gender illusionist. His alter-ego Vanessa Wagner, has appeared on Celebrity Big Brother in Australia and also in advertisements for Telstra, Australia's main telecommunication body.

Other figures include fellow Raelian, musician and champion of intersex rights Jandy Rainbow (aka Jezebel Decibel) and Richard Bell, a famous aboriginal artist, who caused a sensation himself this year in judging a
major art prize by flipping a coin.

We will keep you posted on further developments with the prize and the results of the official announcement on September 15th. We wish Luke all the best.