The stimulating conversations by the pool, the visit of the private zoo of the mansion.... 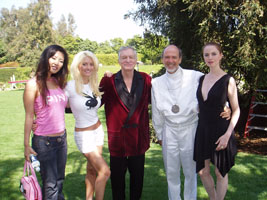 Rael and Hugh Hefner were meant to meet one day. Both men share the same vision on so many issues, including sexuality and sensuality and how love could stop war. It happened yesterday in the beautiful surroundings of the Playboy Mansion where Rael was invited. A few Angels came along, including Sophie and Shizue who were both in the Playboy issue of October last year. The stimulating conversations by the pool, the visit of the private zoo of the mansion, the laughter of the playmates at play in the garden, it all contributed to one of the most pleasant afternoons in this hidden paradise. More images on our video section soon.