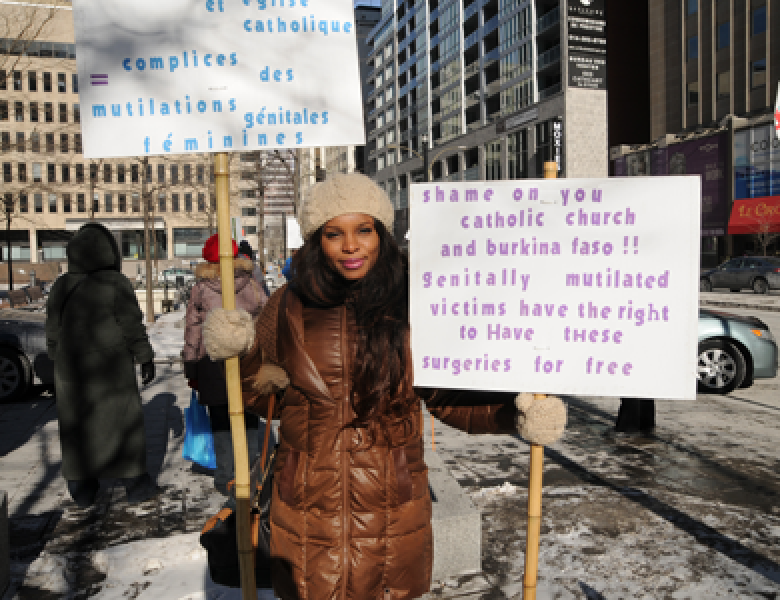 On Friday, March 7, Raelians in Montreal, Ottawa, Toronto and Vancouver offered their support to Clitoraid, outraged of being denied a permit to operate the African hospital yet it meets all the necessary requirements.

"Most of us have given several hours of our time for years to open this wonderful hospital dedicated to repair for free the harm done to millions of women who do not have the means to regain their integrity and dignity", said Hélène Munger, Clitoraid representative in Ottawa. "Despite the silence in response to our request to officially meet with The Ambassador, this morning the latter accepted our letter in person. Surrounded by a dozen people, The Ambassador explained that Clitoraid had to follow certain steps to get the license and that it was not in any way a religious discrimination. He added that his Government is doing everything possible to stop the excision, but he seemed not to feel at ease".

In Toronto and Vancouver, Clitoraid's representatives were able to hand their letter to the respective Consulates. Diane Brisebois, in Toronto, will also try to formally meet with the Consul in the coming days. Everywhere, protesters reported positive reactions of passersby, an obvious support for this humanitarian cause and some of them even said they understood Clitoraid was doing something important.

In Montreal , through the efforts of Gabriel Bluteau, Clitoraid's representatives, accompanied by Daniel Turcotte, met with the Consul, Gérard Coulombe, for a thirty minute interview. Aware of the problem with excision, he was surprised to hear of such refusal. He said that he personally knows the First Lady of Burkina Faso whom he had met during her stay in Montreal in 2008. For many years, she had been very involved in helping women victims of FGM and during her stay she made several conferences specifically on the subject. He does not understand why she declined the invitation for the opening of the hospital in Bobo-Dioulasso. He promised us to discover the cause and to get back to Modjé, the Canadian responsible; some developments we long to hear about.

For more details on the events mentioned above and to follow the developments on Clitoraid, please visit http://www.clitoraid.org/news
Search Raelianews
News Categories
Other News
‹ ›