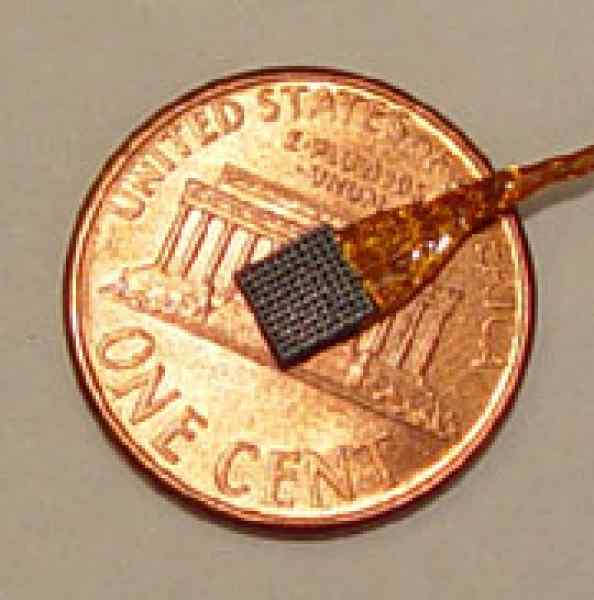 Project leader Eduardo Reck Miranda reported up to 99 percent accuracy in recognizing specific electroencephalogram patterns for musical ideas! Although the musical ideas tested were extremely simplistic, compared with the complexity of musical composition, the team has demonstrated that the idea of interfacing the brain with computers for musical applications is no longer a science fictional fantasy.
In the last week, several papers were issued on similar topics. The Japanese car maker Toyota is working with Stanford University in the U.S. and Edinburgh-based company Affective Media to create a car that can read your feelings.
Toyota has already unveiled a prototype of its Pod concept car, which has headlights that change color to indicate happy, sad or angry moods, depending on how the driver inside is feeling. A good way to limit road rage! The Prophet Rael reading this news suggested that such a sensor should be added to the collar of our politicians to make sure they don�t go on some kind of �rage�, or should we say �war�.

Also in the news this week was the story of a paralyzed man in the US who became the first person to benefit from a brain chip that reads his mind. The 25 year old, was left paralyzed from the neck down and confined to a wheelchair after a knife attack 4 years ago. Thanks to the pioneering surgery performed at New England Sinai Hospital, Massachusetts, last summer, he can now control everyday objects by thought alone. The brain chip reads his mind and sends the thoughts to a computer to decipher. He can think his TV on and off, change channels and alter the volume thanks to this implant and the associated software.
In an article published on www.fastcompany.com/, Kurzweil, famous for his positive vision of the future declared: �My view is we will develop a non-biological component of our thinking as we begin to introduce non-biological processes into our brains. We're in the very early stages of that today. There are people walking around in New York who are cyborgs. They have computers in their brains. For example, the FDA-approved implant for Parkinson's disease. These are people whose portion of the brain was destroyed by this disease. They have this implant. The implant actually does what those biological neurons used to do. The neurons that are nearby are getting signals from the electronic device just as they used to get signals from the biological neurons that were working. And they're perfectly happy to get the signals from the electronic device. This
hybrid of biological and non-biological components works perfectly well. And in fact the latest generation of this particular implant allows downloadable software from outside the patient. So you can actually download a software upgrade from your neural implant from outside. This is a very early stage -- and it requires surgery -- but ultimately we'll be sending nanobots, which will have computational resources and communication. We'll send billions of them through the capillaries of the brain. They'll be able to communicate wirelessly, non-invasively with our biological neurons. If you go out to 2030, say, and talk to a person of biological origin, they're going to have a lot of non-biological processes running in their brain. As you interact with them, you'll be interacting with someone who's a hybrid of non-biological and biological intelligence. We know that biological intelligence is pretty fixed in its architecture. Today, we have approximately 10^26 calculations per second in the humans species. 50 years from now, the power of our biological thinking will still be 10^26 power. It's not going to grow. Non-biological intelligence basically doubles every year. The crossover point will be in 2020s. You get to the 2030s and 2040s, the non-biological portion of our thinking is going to be millions of times more powerful than the biological portion. So if you talk to a person of biological origin, the fast majority of their interacting is going to be non-biological.�

It is so exciting to read everyday more evidence of what Rael announced more than 30 years ago. Not only is it exciting because we Raelians have been expecting it, but it is also exciting as we know that this science is the key to a better humanity, if combined with Love and Consciousness.
If you want to read more of these scientific publications you may subscribe to RaelScience ( see rael.org link)