Men like him are the hope of this Humanity 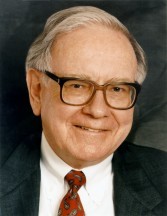 For being such a great example in giving away his fortune, Rael, the spiritual leader of the Raelian Movement, has given Warren Buffett the title of Honorary Guide.

The world's second richest man has announced he will start giving away 85% of his wealth in July - part of it to the Bill & Melinda Gates Foundation as well as to other foundations aiming for a better education and a better life for millions of human beings on this planet.

This title was also given to Bill Gates on July 2004 when he gave 3 billion dollars to charitable trusts. The Raelian Movement Honorary Guides, which are close to thirty in number, are exemplary individuals who are donating their wealth, their talent and their energy in order to make for a better world.

The Prophet Rael who has been given the task to deliver a message to all human beings on earth (see www.rael.org) was also told that his mission is to make people aware of the emergency to stop violence in order to prevent a complete self-destruction of our planet.

“In a last judgment, who do you think would pass? Warren Buffet who gave $37 billions to better education and health or George W Bush who just requested $40 billion more for weapons and war related expenses?”