To stop Pedophilia, It is urgent to give right to sex to Catholic Priests 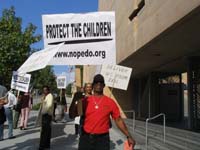 A week ago, the LA archdiocese has agreed to pay $60 million to settle 45 lawsuits alleging sex abuse by priests! According to some source, the settlement involved 22 priests. The Los Angeles archdiocese still faces more than 500 lawsuits from people who allege they were abused by about 200 priests and laypeople dating as far back as the 1930s.
In 2004, the Diocese of Orange agreed to spend $100 million to settle 90 abuse claims.
The U.S. church has spent at least $1.5 billion since 1950 to cover sex abuse by Roman Catholic priests. Four dioceses -- Tucson, Arizona; Spokane, Washington; Portland, Oregon, and Davenport, Iowa -- sought bankruptcy protection from a flood of lawsuits.
Settlement talks have been under way in the remaining California cases since 2002, when legislators passed a state law that suspended for one year the statute of limitations for sexual abuse claims. Nearly 1,000 people filed claims against the Roman Catholic Church in California under that law!
However money cannot solve the problem. It may help some victims, but there are still children being abused today by human beings who are denied the right to have sex, the Catholic Priests. Every one of us has desire for sexual intercourse, be it homosexual, heterosexual, bisexual, once a year or ten times a day, it is part of our genetic make up with a large array of differences. A fulfilled sexual life is one of the keys to develop a healthy brain. Archbishop Milingo who married and leads the married Catholic Priests organization, can testifies of the torture they all lived before getting married. We shouldn’t be surprised to see the weakest of them turn their desire towards the innocent children surrounding them.
Enough is enough. The Raelians have been denouncing the situation for years through the Nopedo association. They were in front of Mahony’s Church in LA on Thanksgiving to tell the Catholic population going to the mass, to stop closing their eyes and ignoring the situation. They must tell their pope to stop abusing children as he is responsible of them all, keeping this Priest’s celibacy rule that was, by the way, introduced in the Middle Age only, in order to prevent priests wives to inherit Church’s property….!! With the Catholic Church, it often goes back to money, isn’t?