The UN must be replaced by a neutral organization 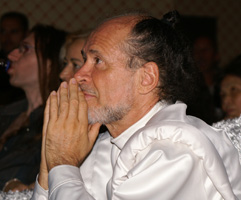 A statement from the Prophet RAEL:

The UN must disappear to be replaced by a more democratic and neutral organization. This is what I have been saying for the last 30 years...The UN is not a democratic organisation. It is an elite club run by a few ex-colonial and modern imperialist superpowers, all of them from white and western countries.

If Bush, Blair and other leaders of imperialist, ex-colonial countries really want what they claim they want: to promote democracy, then they must accept a truly democratic UN.

But the truth is that they don't really want it, what they really want is to continue ruling the world, both economically and spiritually. As my setting up of the ICACCI (International Committee Against Christian Calendar Imperialism) pointed out, why is the UN, which is supposed to represent the whole of humanity, using the christian calendar for all its official documents when only 25 % of humanity is christian?
Why should Muslims, Sikhs, Jews, Buddhists and Shintoists etc who each have their own calendar, be forced to sign UN papers using the christian calendar?
The UN could adopt a neutral calendar, using as year zero the year of it's own inception or the year Hiroshima was bombed, as a symbol of peace. But instead, it still uses the christian calendar which forces non-christian countries, who happen to be the majority, to recognise Jesus’ supposed birth date when signing documents – without any sensitivity to the feelings of those whose forefathers were massacred, bonded into slavery or rampaged by crusades in the name of christianity.

The UN has only 2 choices: completely change and become a truly democratic, non-religious organisation or be destroyed and replaced by a truly neutral and democratic organization. Maybe the latter is the best solution as it is always very difficult to change existing things. Maybe the new world body which would replace the UN will cost much less and be much more democratic: “made by the people for the people”. It could even be a virtual internet-based world government, where the people can express their choices directly online. This on-line democracy would have the added advantage of dispensing with the most dangerous, least trustworthy and expensive people on earth: politicians. My proposition of a web government could be the right solution to replace the obsolete UN.