The Prophet Rael congratulates William Pena for his condoms rules 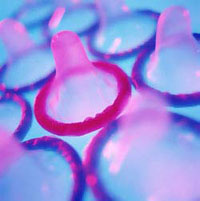 Raelians of Colombia and from all over the world applaud the proposal of Mr. William Pena, member of the city council of Tulua, Colombia, to have all men, starting at 15 when they become sexually active, to carry condoms with them, just like they do with their ID.

The Prophet RAEL has asked that his personal support be expressed to Mr. William Penna. He declared: "the Pope and the Catholic Church are responsible for a real genocide and should be accused of crimes against Humanity as they oppose the use of condoms while thousands of human beings are dying of AIDS, following their recommendations. To pretend that abstinence and fidelity are the only solutions to the problem is denying the hormonal reality that no education can stop. The fact that tens of thousands of Catholic Priests have been condemned for pedophilia in the world is proof, if necessary, that hormones are stronger than religious decisions.

According to the info we have received, the men who don’t have condoms in their possession would have to pay a fine or take a three hour course on how to prevent AIDS in Tuala, as 14 people have died of sexually transmitted diseases there last year. “Imagine all the lives that would be saved on the planet if all the cities in the world were passing this law” said Allan Rojas, Raelian Priest in charge of the Colombian Raelian Movement.
This measure wouldn’t be an obligation to be sexually active, explains Mr. William Pena, but it would demonstrate that these people are conscious enough to protect themselves if they decided to be. “What is important, said Allan Rojas, is to educate and save lives, especially in the young generation so that they can enjoy their sexuality freely and healthily”.
Search Raelianews
News Categories
Other News
‹ ›