Instead of attacking, he should declare a national day of prayer 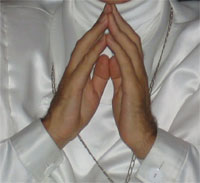 By proclaiming September 16th a "National Day of Prayer for Hurricane Katrina", George Bush is really showing the world what a great leader he is. Forget about people dying without any help after a full week of being waist deep in water. Forget the 10,000 people forsaken in the superdome without food or safety, open prey to rape and abuse. Forget about the US army coming in to help only 1 week too late. A national day of prayer! What a genius! That's what the hundreds of thousands who lost everything really need!

If only George Bush had applied this new policy earlier, so many lives and money would have been saved. Let's imagine that after September 11th, instead of initiating a "war on terror" and killing 30,000 innocent Afghan civilians, Bush had declared a "National Day of Prayer" against terrorists, relinquishing the management of would-be terrorists to police and security forces as is their job anyway. Or, imagine that after making everybody falsely believe that Iraq was threatening the USA with weapons of mass destruction, Bush would have declared a "National Day of Prayer" against Iraq and allowed UN specialists such as Scott Ritter to prove that there were no WMD, instead of killing 30,000 innocent Iraqi civilians, leading 3,000 US service-men to death and injuring 15,000 of them who will now be handicapped for life...

Yes, national days of prayer can really make a difference. And instead of wasting the 200 billion dollars that was lost on illegally attacking and occupying Iraq, he could have bought a new house for every American who lost a home in the Katrina disaster.

Now, let's just hope that the new Bush policy will continue: instead of attacking Iran or Venezuela because of their behaviour not fitting in with US policy, he should declare a national day of prayer against them!

Of course, some might argue that a national day of prayer wouldn't achieve anything. What is the use of praying to an almighty god who lets thousands of innocent children die through tsunamis and hurricanes, other than to thank him for killing so many people and destroying their homes? This leaves us with just two possibilities: either such a god is not almighty, because he couldn't prevent the disaster, or he is really evil since he allowed it to happen when, being almighty, he could have prevented it. In either case, this is a god who doesn’t deserve any prayer or respect.

The truth is that there is no god. And, every natural disaster proves it (and there are infinitely greater and more devastating disasters to come, which will humble humanity, especially "the" superpower, showing it to be powerless and naked.)

But these "National Days of Prayer" are a great idea, even if there is no god to pray to, for as long as they just keep on only praying, at least they don't kill anybody or invade any country. Let's hope that in future, Bush will try to solve all his problems with national days of prayer!

And if the US treasury is empty because too much money was wasted on illegal wars and occupations, then Bush should also declare a "National Day of Prayer" for the US treasury instead of raising taxes. I am sure that every American citizen would love it...