A peace concert scheduled in Hiroshima in August next year 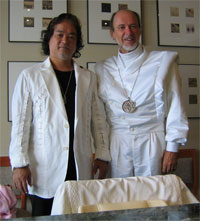 Shoukichi Kina, singer and musician, author of top-ten songs in Japan, is not only an icon artist, he is also an elected representative at the Japanese Parliament. He has been involved in actions to stop wars and his activism won him a place at the highest level of the Japanese politics. Shokichi started a campaign to change weapons to musical instruments and his organization is accepted as a non-governmental organization. He has been to many countries such as Iraq, North Korea, the USA to appeal for the preciousness of peace with songs and dances.
His vision of peace is so in sync with the one of Maitreya RAEL that a meeting had to be organized.

The conversation lasted an hour during which they decided to organize common actions.

- A peace concert, like a new Woodstock, was proposed by the Prophet RAEL. It will be coorganized by Shoukichi Kina and the Japanese Raelian Movement and should take place in Hiroshima next August 6th.

- RAEL also explained his project of world government on the internet where people are directly creating a virtual world government. ‘ If no more politicians are involved, it means that the weapons industries cannot rule the world anymore.’

- RAEL suggested that a committee supported by the government should be started that would encourage artists to be more involved in peace processes. A ‘ peace and love award’ could be delivered each year, supported by the government and the politicians. The Prophet RAEL reminded us that every revolution is cultural. ‘ The peace and love revolution must come from the culture’. Mr.Kina said that he will try to organize such an award.

Here are a few more exerpts of the conversation taken from notes :

Maitreya RAEL : Some people say a song cannot change the world, but they are wrong. Butterfly wings can generate a typhoon. A song can bring revolution. Art brings peace.
Shoukichi Kina : Celebration is good to overcome war. Dancing, singing and meditation can stop war.

Shoukichi Kina : You are all so beautiful
Maitreya RAEL : Love makes people beautiful.