For her actions for peace and non-violence 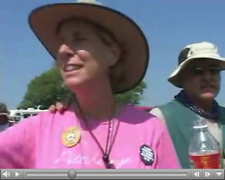 The Prophet RAEL awards the title of Honorary Guide of Humanity to Cindy Sheehan for her activities to promote peace and non-violence.
Cindy Sheehan, whose soldier son, Casey, was killed in Iraq last year, has campaigned since then to demand an explanation for the war from President George Bush. She established her camp near the gates of his Crawford ranch, and almost single-handedly re-energized the US peace movement.
Here is what she declared on September 25th in Washington, DC : “As we stand here on the grounds of a monument that is dedicated to the Father of our Country, George Washington, we are reminded that he was well known for the apocryphal stories of never being able to tell a lie. I find it so ironic that there is another man here named George who stays in this town between vacations, and he seems to never be able to tell the truth. It is tragic for us that our bookend presidents named George have two completely different relationships with honesty.”
The American Raelians welcomed this new nomination with a special joy as they have been sending their support to Cindy from the start and highly recommended her.