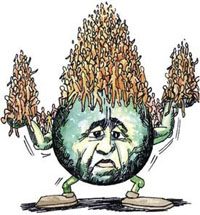 Furthermore, we have to recognize the fact that the populations which have the most children are those steeped most deeply in religious education which promote the famous concept of "be fruitful and multiply". This means that at least 50% of the world's population which has been indoctrinated with this motto! There is an undeniable correlation here which leads us into what we do as a Movement, to facilitate changing the paradigms to which conservatives like religious leaders cling, teaching a new philosophy to anyone who is starting to question. This philosophy is deeply rooted in love, self respect, respect for others - and science instead of ancient religious dogma.
Raelians actively teach something else which can help humanity to avoid the overpopulation problem as well as other serious threats facing us on Earth today. That little diamond of information is: to understand the difference between love and pleasure. Wrongly scorned by religious dogma, pleasure is what drives us in our life! It is, simply, why we exist and how we came into existence. It's so simple but it bears repeating. Pleasure is why we exist and how we came into existence. There were, at one time, very pleasure-filled parents of Adolf Hitler and the would-be Pope. These parents were feeling pleasure or else neither of these 2 people would have been born. Pleasure is of course what drives us to have sex and create children. What is even more fascinating is that this "pleasure system" was put in us by our beloved Creators in order that humans as a species would survive. What better way to ensure humanity's survival than to put these genetic/biological programs in us, making us able to feel pleasure from them?! :-) These programs are ingenious! Programs like these are why a bird knows how to build a nest or sing a certain "song" that other birds do not. These programs are why a kitten automatically knows to use the litter box. (thankfully..lol..) These programs are why a baby knows to suckle when a breast is placed in its mouth. These are the brilliant programs which are placed in all species in order to ensure survival. What Raelians and scientists from all over the world are saying is that humanity has survived and populated the Earth quite well. it is now time to stop and use our scientific knowledge to keep the pleasure without reproducing. Contraception tools are numerous and readily available, unfortunately they are still demonized by the main religious leaders.
The emergency we face today has nothing to do with immigration, it is only a matter of religious dogma and how slowly conservative religious leaders accept scientific facts.
As is often the case, we are not even aware there is a problem until it becomes so huge we wonder how we ever missed it. This applies to each of us as individuals in our daily lives as well as to our societies on Earth. Raelians are trying, with a lot of love and laughter, to help those immersed to realize what they are swimming in - religious dogma. The public is so deeply immersed in the mindset that only a few are even aware of the impending problems. We look for solutions within the mindset when history should have taught us by now that any real solution always came from someone thinking outsidethe accepted paradigm. This is why Raelians will never stop claiming that the pope for example is a criminal against humanity and it is urgent to inform the people of what the planet is facing. To look at immigration as the problem, it is looking at a piece of land with borders instead of looking at the whole planet, a planet so tiny when compared to the sun around which it revolves, itself so tiny compared to most other stars in the galaxy...this galaxy itself only one of billions we have seen...and those galaxies are part of something larger, the universe...which is itself something larger. It is our "destiny" to go out there. It is given to us the means to live forever, thanks to science! But there is also a cosmic natural selection in place. If we do not master our aggression toward ourselves and our environment, we will not even survive the next decades. We are like children, not wanting to miss anything! Our future is in our hands, not in the dogma of eons past...
Now we wish you as much safe sex as possible . :-)))