King of Bhutan new Honorary Guide of the Raelian Movement

A culture of being creates real happiness 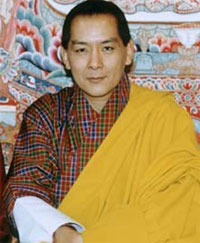 His Majesty King Jigme Singye Wangchuck, King of Bhutan has been awarded the title of Honorary Guide of the Raelian Movement for his admirable decisions which are examples for the whole of humanity, for more peace and love.

The support of RAEL and the 65,000 members of the International Raelian Movement was sent to him today for his actions and wise ruling, particularly the priority he gives to "Gross National Happiness" instead of economic growth, his decision to make the Kingdom of Bhutan the first non-smoking nation, the protection from cultural pollution by tourism, his offer to give up his power as supreme ruler to his people who, loving him so much, voted democratically to keep him as their ruler.

The last Honorary Guide nominated was Warren Buffet following his decision to give his fortune to charity to help for better education and health in the world.
The Raelian Movement is an atheist organization which strives for an absolute non-violence and human rights for all, as well as for the unconditional defense of Science as the key to better humanity – all this in preparation of the welcoming of our Creators, the Elohim, the human scientists from another planet who were mistakenly taken for gods by our ancestors. (www.rael.org)