It is urgent to ban Cluster Bombs

As well as all lethal weapons 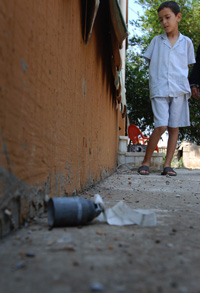 More than 100 nations are taking part in a Dublin summit where Diplomats are gathered to secure a treaty banning the use of cluster bombs.
On Wednesday, the UK government showed its commitment saying that it will end the use of cluster bombs by its armed forces, and that it wanted a planned international convention outlawing the munitions to be as strong as possible.
Cluster bombs, as the name would indicate, are comprised of thousands of smaller bombs that spread across a wide area. Not only do these kill military personnel, they kill civilians. Worse, they often fail to explode, leaving a deadly bomb as civilians return to their homes. (The young boy here lost both of his legs when he stepped on one of these).
The UK Prime Minister has decided that these weapons of concern in the UK army would be withdrawn from service.
Unfortunately, the United States, China and Russia -- three leading military powers -- are not represented at the meeting and don't show any intent to chane their weapon stocks.
The United States said last week that the treaty could jeopardise U.S. participation in joint peacekeeping and disaster relief operations because most U.S. military units have these kinds of weapons in their inventories ... thy clearly don't intend to modfy thir weapon stock.
Rael made the following comment: "Of course cluster bombs should be forbiden as well as a lot of other weapons like land mines, depleted uranium ammunitions, nuclear weapons, and all existing weapons which should all be replaced by non lethal weapons, which do exist right now and could easily equip all peace keeping armies. If countries like the US want to keep deadly weapons it's because they want to continue to dominate the world in an imperialist style. But soon the biggest countries of the world, China and India, will end this domination, and if they also equip themselves with the same deadly weapons,(and they are doing it !), they may well one day use it against the US (as well as torture and Guantanamo style camps ) then the US may well regret one day not to have act to make all these terrible things illegal.Leaders and diplomats from around the world have organized a conference that will attempt to agree upon a treaty which would ban the use of cluster bombs.