If Zidane had attended a Raelian Seminar...

he would not have disgraced France 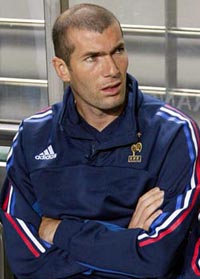 Would he have disgraced France?
Millions of people all over the world watched as Zidane lost his cool during the football finals when he succumbed to the alleged taunts of Materazzi and headbutted him on prime TV. In so doing, he confirmed yet again the primitively tempestuous nature that French culture is known for around the world and disgraced his homeland. But could he have avoided it?
Yes, if he had attended a Raelian Seminar, he would have learned how to discard the programmed animal reactions that his culture impregnated him with where insult automatically leads to a violent response and instead, put consciousness in charge of his actions. In this way, any insult can just be seen as a harmless sound coming from his despairing opponent. Like water off a ducks back it would not even touch him, and his response could have been love instead of hate. This would have foiled his opponents attempts to taunt him, it would have kept him in the game, France might have won and kept their honour and Zidane could have finished his career in style.

One moment of automatic unconsciousness in times of conflict can have huge repercussions. What sort of example does Zidane give to the world? Like the American invasion of Iraq, or the Israeli killings in Gaza, he is telling all that responding with violence is an acceptable means of solving problems. No wonder that there are so many wars still waging today.
The real answer to world conflict is to learn to respond with consciousness and love and that is what Rael, the spiritual leader of the Raelian Movement teaches during the week long seminars.