Media should inform their victims before doing a piece on them 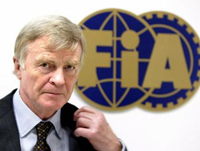 You might remember a story about Max Mosley, president of the FIA , International car association, who successfully sued a U.K. tabloid for publishing photos of him in his personal life. U.K. Court ordered the News Of The World tabloid to pay Mosley about $120,000US (60,000 pounds), saying that the method used to film him was an unlawful invasion of his private life. The tabloid tried to retaliate by claiming life and for then claiming that he was some sort of Nazi sympathizer just because he dressed a certain way at a private party. You know…tabloid stuff.

After his successful suit, Max is taking things a step further in trying to change the privacy laws in the U.K. His lawyers confirmed Max has also issued an application to the European Court of Human Rights, in the hope that UK's privacy laws will be changed. The full statement from Mosley’s attorneys ((found on www.autosport.com) ) and shows that not only that the tabloid, which acted like any other “freedom without responsibility” media, knew very well what they were doing in not informing Mosley about the upcoming release of their article and video on his private life. The editor of the NOTW admitted freely in court that they did not inform Mosley because they did not want him to have a chance to go to a judge to get an injunction to prevent its release.

Rael commented “This is a very important obligation that should be respected by all media in all countries: to inform the people they will write about before publication in order to give them the possibility to get an injunction from a judge stopping the publication. This is extremely important because even if the victim wins damages in court from the “mediashit” companies (that are absolutely everywhere), the moral and character damage has already been done to the person since the media’s lies stay forever in the mind of the public, poisoning the public opinion conditioned by these liars.”

Whether it’s about Max Mosley, the Mormon group who had their children taken from them earlier this year, the lies spread about celebrities or the lies spread by the media about Raelians – all cause great personal difficulty for thousands of people only in order to sell more papers or get higher ratings on the 6 O’clock news. The fact is that once the media put the lie out there, the damage cannot be undone.

Similarly, as you might have read here a few months ago, the Raelian Movement in the US has filed a lawsuit against 2 men who fished such lies from assorted media, added more lies to them and posted terrible things about us. This is the usual way – a rumor gets started and people add to it every time it is repeated until it is impossible to reverse the damages. One of the 2 men named in the suit even fled to Egypt in order to avoid it. He is gone but the damage is done, and we hope to right this wrong as much as possible in court with his partner who remained behind, left holding the bag and is now lying to the court now saying that he had nothing to do with it – while we have signed confessions from him, a signed contract from him, many witnesses as well as his testifying on Fox news that he did it - and at least 10 other proofs that he did exactly what we said he did. His name is Joseph McGowan from Indianapolis, Indiana and we advise that no one get involved with him.

And don’t forget - in the first article we posted about Mr. Mosley’s court victory, we also mentioned a site which Rael recently founded whose goals are to expose the ways in which the media manipulates readers/viewers. This site is just starting and will soon be given a new format but you can get an idea of the direction it will be taking. www.mediashit.org