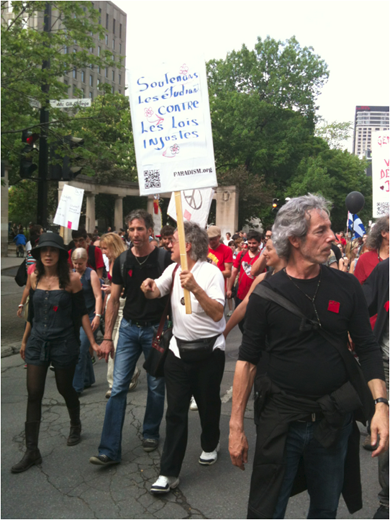 This past May 22nd, more than 300 thousand people took to the streets of Montreal to support the hundreds of thousands of students currently on strike, and to protest against the preposterous decisions made by the Government of Quebec. Among them, tens of Raelians were there to show solidarity and bring a sliver of hope.

According to political leaders, it’s a crisis. And to solve this so-called crisis, the provincial government in Quebec recently passed an emergency law that not only restricts protests but, in a broader sense, is an attack to fundamental rights, such as the right to hold meetings, the freedom of expression, and the freedom to protest peacefully. When we feel there is a crisis, the quick fix is to find a remedy and the remedy they have chosen was the adoption and implementation of a real police state. Thousands of arrests have already been carried out against the youth population and the violence and brutality committed against them has been unprecedented. But the youth remained strong and determined: “We will keep moving forward, not backwards,” they shouted. A few student leaders, inspired by Gandhi and Martin-Luther King, even called for civil disobedience. In fact, they put together a website, inviting everyone to express their disobedience online (www.arretezmoiquelquun.com).

Those who lead us, with their usual blatant lack of vision, make false claims about the situation and are completely out of touch with reality. Consequently, they multiply their mistakes. What we are witnessing isn’t a crisis, but a revolution. And this revolution goes beyond these protests by students and their strikes against tuition fee hikes in Quebec. This revolution is part of a larger movement of protests around the world, a global “I can’t stand it anymore” movement against corruption and this filthy heritage passed on to the young generation. The Quebec youth doesn’t only say ‘no’ to the current school bill, but they also say ‘no’ to the overall bill accrued by past generations. AND THEY ARE RIGHT! AND THEY ARE NOT ALONE. Their actions aren’t different from the ones carried out by the Occupy movement, the mega-protests in Spain and Greece, as well as the ones in the Arab countries (aka the Arab spring). Here, we are talking about the Maple spring. What this young generation needs more than anything else in order to put the broken pieces that their predecessors left them back together and to clean up this huge dump they are being handed, is EDUCATION. Indeed, only knowledge, science, and technology will allow current generations to repair the mistakes made by all those who did not have a vision, who acted in the name of selfishness, who continue to contaminate our beautiful planet, and who now want the young generation to foot the bill for their errors and abuse. The youth may be young, but they are not stupid. And the current leaders, those who hold positions of power, are now realizing that fact.

Several years ago, Maitreya Rael spoke of a revolution of the youth. He predicted a return to a “peace and love” movement, similar to the “peace and love” hippie movement of the 60s. This prophecy is now taking place before our very eyes. And while many are worried sick about what the future holds and wonder how we will solve all these problems, we, Raelians, are cheering because, once again, the last Prophet was right! This is why everywhere around the world, Raelians are back on the streets, in the heart of the revolution, to propose THE solution: PARADISM! Thanks to this, we can all feel this second wind invade us because we’ve been waiting for these prophetic moments for a very long time!