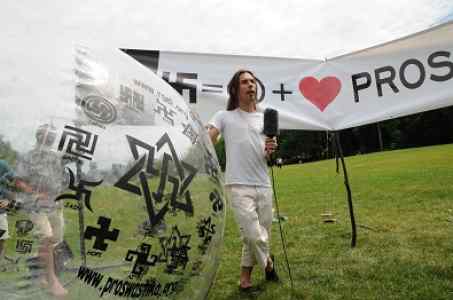 Events were held all week on all continents in support of this precious cause in the eyes of Raelians who wish to change the opinion in Western countries about this symbol that has been around for thousands of years. It is peacefully revered by over a billion people now, especially in Asia; a symbol used everywhere on earth in major religions.

In Canada, Raelians have held their events on Saturday, July 12 and once again this year, the campaign has not gone unnoticed despite the refusal from the giant billboard owners, claiming that it would displease some communities.

In Quebec City, 25 people participated in this event with a human size balloon, placards and leaflets. On a predetermined route, the Raelians crossed hundreds of people overwhelmingly positive towards us. Donald Tremblay, in charge of the Quebec City region tells us: "One of the highlights was to meet a group of tourists from India ... you imagine their reaction! On the way back, a few interested people to who we handed out flyers went directly online to access our site. The event lasted almost three hours and it was a great success! What a great team, what a beautiful harmony!!! "

Meanwhile, in Toronto, the regional team met in High Park, where the Raelians created swastikas on the grass using their bodies, and of course distributed cards with enthusiasm while contacting passers-by along the lake for great conversations with interested and open people. Patrick Rheims, head of Toronto, tells us his impressions of the day: "I'm sure we opened the minds of many people today, such as this Jewish woman, upset, asking us what we were doing exactly. After hearing our explanation, she calmed down and "the work was done." A seed was planted and one mind was opened. At the end of the day, we could see that our warmth and behavior clearly created an impact on the public, for which the association between the swastika and our harmony might prevail now."

In Montreal, fifty Raelians gathered in a popular park downtown (where the famous Mont-Royal Tam-tams resonate). In front of a beautiful banner (visible also for people traveling by car), we informed passers-by and left many cards giving the explanation about our worldwide action to rehabilitate the swastika. "We had positive reactions and also strong emotional reactions, which confirms the importance of our work", said Nadia Salois, Regional Guide of Greater Montreal, beautifully summing up the reason of our presence in this beautiful day.

Three hours later, the Raelians in Vancouver took over in support of this action for the Swastika Rehabilitation Week. The event started with a meditation on serenity, peace and love. After installing the banner and inflating the balloons, a Raelian wandered topless inside the big Swastika balloon, which created a lot of interest of passers-bys, said David Dunsmore, Guide in charge of the event in Vancouver: "People were very sensitive and respectful throughout our action. It was such a pleasure to know that we represent not only the spiritual Raelian symbol, but also the symbol of infinity of the Elohim, our Creators, through which we have the privilege to make it known to all humanity."

Fabrice Piché, Guide in charge for this event in Canada was very happy with this pan-Canadian event. Fabrice is looking forward to repeat the activity next year in the hope that other groups wishing to rehabilitate the swastika will join us.

Links to more photos on www.proswastika.org :