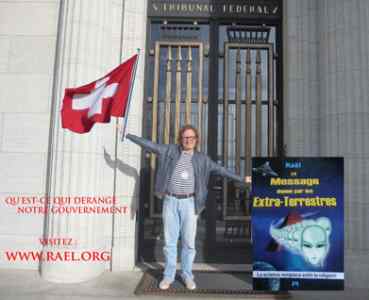 On March 29th 2001, the police department of Neuchatel refused to the Swiss Raelian movement the authorization to put posters from April 2th to April 13th 2001 on the public locations reserved for associations, on the ground that these “posters are threatening morals“. The poster, shown in the image here, simply depicted a few extraterrestrial faces, a pyramid and a UFO suggesting a link between today's UFO phenomenon and past civilizations which illustrates some of the background of the Raelian philosophy. Nothing immoral in there!
On April 22th 2005, the administrative tribunal of Neuchatel rejected the appeal from the movement. on the ground that the interdiction of these posters was necessary “in a democratic society for the protection of morals“.
On April 10th 2006, the movement filed a case with the ECHR arguing that the interdiction to display their posters was a violation of articles 9 and 10 of the Convention. On January 13th 2011, the ECHR ruled by 5 to 2 votes that there was no violation of article 10 of the Convention on the ground that the Swiss State benefits of a “margin of appreciation” about the use of its public space and the State has reasonable grounds to forbid the posters.
In their dissenting opinion Judges Rozakis and Vajic expressed that the movement was not forbidden in Switzerland and should be able to promote by posters its ideas and its non forbidden website.
Here is a summary of the statement of these 2 dissident judges, one of them being the President of the Court.
The concerned poster in itself doesn't show anything wrong or anything that could shock the public.”.”The Raelian association isn't forbidden and exists in Switzerland since 1977.” “An association is a legal entity which, when it functions in a legitimate manner in the society, has the possibility to spread freely its ideas and opinions in order to reach its objectives without obstacle, using the means that the society offers to all its members. The legal system of a state can refuse the creation of an association when it considers that it violates the moral, political or any other values of the society it represents. However from the moment that the state approves the goals of the association, one can assume that this association must be free to propagate the main ideas coming from the goals and objectives listed in its statutes to the society.
The Swiss Raelian Movement has naturally decided to bring the case to the High Chamber of the ECHR as it is an essential matter of principle. If the Raelian association is registered in Switzerland then it has the same rights and obligations as the any other association.