and gives his support to President Chavez 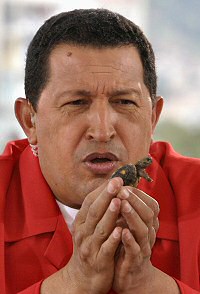 The Prophet RAEL disapproves the declarations of Cardinal Rosalio Castillo Lara, the most senior Catholic clergyman in Venezuela who says that the government of Hugo Chavez appears as a dictatorship and has lost its democracy.

What should we say about the Vatican whose leader, the Pope, has absolute power in his state and is elected for life? Where is the democracy in the Vatican?
The Catholic Church also accuses President Chavez of lacking religious neutrality.

The Prophet Rael said today : “The Catholic Church’s leaders in Venezuela are traitors, fully submissive to a foreign power : the Vatican, that is a state as well, and as such, looses its religious neutrality as it intervenes in Venezuela. It is actually for that same reason, for not being told what to do by the Vatican, that a King of England founded the Anglican Church.”