You are sick if you surrender your power to choose 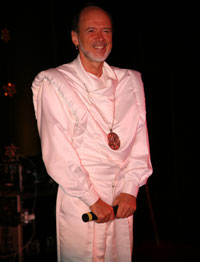 The Prophet Rael accepted to give an interview to our RaelRadio correspondent in Las Vegas last week. Among other topics, he talked about the new fashionable trend in America to surrender one’s choices to god’s will.
(You can listen to his interview now on www.Raelradio.net)

Here is a summary of his words, taken from notes.
There is a new fashionable trend, to think that life is purpose driven. A new book, "the Purpose Driven Life", was made famous by a woman who converted her kidnapper and made him surrender and apologize using this new philosophy, saying that every human being has a purpose in life, a purpose given by god.
Every lonely human being feels better if he thinks that a guardian angel is taking care of him. But this is only imagination.
In the name of god, people could destroy freedom.

If we go back to the roots, to Jesus’ message, to love each other, we don’t need a god to apply that.
The danger of a god-driven life is that you execute the orders of god, whatever orders you believed you received; like George W. Bush saying that his mission to send the army to Iraq was given to him by god!.
This theory excuses the unacceptable. It allows the killing of abortion doctors. Hitler could have had this philosophy.
Everything you do, god wanted it? : this is the power of evil.
Don’t fall in the trap of god believers who surrender their consciousness. Like in the case of the tsunami where people think it was god’s will and the survivors thanked god for being alive… this is terrible.
There are Rabbis who organized the trial of god after World War II and the killing of six million Jews. “Is god guilty?” This is a question that no Catholic Priest or Muslim Imams would dare to ask. It is the beauty of the Jewish religion, they dare question and some Rabbis left their religion after declaring god guilty. That’s beautiful.
To live a god-driven life is dangerous.
You are responsible for what you do, for what you say and for the love you give.
You need to develop a brain full of muscles and train it asking yourself “What is right? What is wrong?” That’s what we have been created for.
The Elohim are telling us: “Don’t do anything that goes against your consciousness”.
If you live a god-driven life, you surrender the power to decide what is good and what is bad.
Every human being who surrenders its power of choice is sick.
You are sick if you are not using your consciousness.
This bestselling book is very dangerous. It is another attempt to have people dependent on a god that doesn’t exist.