Humanity needs abnormality as it is the most beautiful expression of difference. 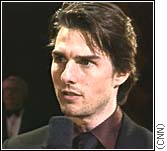 Rael made the following comment: on this subject Tom Cruise and Scientology are right ! As an example, there is no need to give psychiatric medicine to children with attention deficit disorder who are just bored by the poor content of traditional education. For sure many geniuses were having this disorder ...and nobody would say that giving drugs to Einstein, Beaudelaire, or Mozart to make them "normal" would have been a good idea.
Geniality is always built on abnormality. Humanity needs abnormality as it is the most beautiful expression of difference.