Aboriginals are the Palestinians of Australia

They need their own state 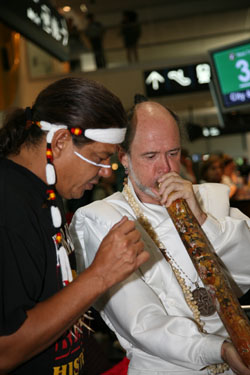 The Australian government announced that it will issue its first formal apology to Aboriginal people when parliament resumes next month. The apology is aimed at the "Stolen Generations": To summarize, Australian Aboriginals and Torres Strait Islanders were taken from their families when they were children and made wards of the state, with parental rights denied, under successive acts of parliament. For several generations, thousands of such children were given to white families or institutions to raise, ending in 1969.

Now, almost 40 years later, Australia is finally ready to apologize. Some call it a highly symbolic move, but for Rael, the upcoming apology isn’t enough.

"Not only should compensation be paid, but an independent state must also be created for these original inhabitants,” Rael said in a prepared statement. “And it should be established under a name other than 'Aboriginal,’ which is the name designated by the bloody invaders from Europe. These people are the Palestinians of Australia, to the shame of the current generation."

Rael said the human rights abuses and genocide attempts against these indigenous inhabitants have never been properly addressed by the Australian authorities.

“If the upcoming apology doesn’t attribute guilt to the current generation of Australians, that omission doesn't absolve them from the responsibility of making reparations for the crimes committed,” he said. “They can’t just be sorry for the crimes of previous generations and then walk away. Since they’re still benefiting greatly from those crimes, they must now assume the responsibility of repairing the damage done to these indigenous peoples.”

He added that the only way to make such reparations is to reverse existing assimilation policies and create an independent state for those who were wronged.

“Australia’s indigenous people need more than a ‘sorry’. It’s time for the decolonization of Australia to actually be carried out,” he declared.

(Photo: Rael is welcomed by a group of Indigenous Australians at Brisbane's airport in 2006.)
Search Raelianews
News Categories
Other News
‹ ›