A 'must read' interview 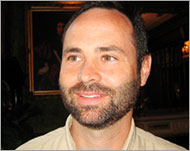 David Dionisi, a former US army intelligence officer, now advocate of peace, social justice and humanitarianism, just released his new book, “American Hiroshima”.
Aljazeera’s Shaheen Chughtai caught up with him in London and you can see the resulting interview following this link...

As you can read there, he confirms many of the positions of the Prophet Rael, who declared today that "this is a “must read” interview" and that " it's
precisely what he has been saying for years..."
…. Enjoy it!!!