A Fatwa of Love

Raelians of the world have mobilized at the request of their Spiritual Leader RAEL to prevent the worst to happen, following the Fatwa launched by the great Ayatollah Ali Al-Sistani, spiritual leader of the Shiites and leader of the fundamentalist movement in IRAQ; his Website, encourages his followers to kill homosexuals in the worst possible manner .
Shocked by this news, the president of ARAMIS-International, Pierre-Paul Bourque brought it to the attention of RAEL, spiritual leader of the International Raelian Movement and initiator of ARAMIS-International.org (Raelian association of sexual minorities) who issued a FATWA of LOVE in favor of all homosexuals on Earth, but more particularly towards those of the Middle East. He issued as well, a FATWA Of LOVE towards all these Ayatollahs, Imam and religious leaders, who, by their homophobic declarations, reveal to us their personal suffering. 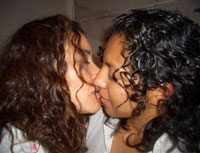 May 1st, international day of love, was selected as the date to launch this FATWA of LOVE. On this occasion, the president of ARAMIS-International will launch a vast campaign of distribution of love postcards, which will be then sent to Ayatollah Al-Sistani.

The spiritual leader RAEL recalls that the only, unique and true solution to physical or verbal violence is love, even towards those who behave like our enemies.

Questioned on the fate of homosexuals whose life is in danger in these Middle Eastern countries, the president of ARAMIS-International declared: "I invite them to flee from these countries as long as barbarism will reign there and to take refuge in countries such as Holland and Belgium, which in a humane gesture accept homosexuality as a reason to request political asylum".

Massive distributions of these love cards will be organized by ARAMIS everywhere in the world, starting May 1st until the end of October, that is to say the period corresponding to the demonstration of gay pride on the planet.