Globalization is a wonderful trend 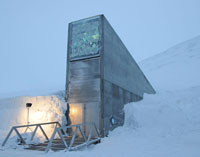 “All the "Illuminati" myths are distilled through the internet to try to reverse the wonderful trend of globalization, which will lead us to the only way to save humanity: a world government ending nationalism, making all national armies obsolete and ending the huge waste of money which is military spending”.
Rael made the above comment today after reading another article claiming that the "doomsday" seed vault built in Norway earlier this year is actually a threat for Humanity.
The seed vault was built deep within an Arctic mountain in the remote Norwegian archipelago of Svalbard, in order to protect millions of food crops from climate change, wars and natural disasters
The vault will serve as a backup for hundreds of other seed banks worldwide. It has the capacity to store 4.5 million seed samples from around the world and shield them from man-made and natural disasters, while dug into the permafrost of the mountain, and built to withstand an earthquake or a nuclear strike.
Norway owns the vault in Svalbard, a frigid archipelago about 620 miles (990 kilometers) from the North Pole. It paid $9.1 million for the construction. Other countries can deposit seeds without charge and reserve the right to withdraw them upon need.
The collecting of seeds is funded by the Global Crop Diversity Trust, which was founded by the U.N. Food and Agriculture Organization and Biodiversity International, a Rome-based research group.
The mission of the Trust is to ensure the conservation and availability of crop diversity for food security worldwide. It is working with more than 60 countries to "regenerate" unique collections of crops critical for food security, and to ensure that they are duplicated elsewhere for safety in a collection that meets international standards, as well as in the Svalbard Global Seed Vault.
The Trust is the only organization working worldwide to solve this problem, and according to Science Daily has already raised over $140 million.

Among the generous donators who support this unprecedented global initiative to rescue threatened, high-priority collections of crop diversity in developing countries and to support information systems to improve their conservation and availability, it is of no surprise to us to see that the Bill and Melinda Gates Foundation offered $30 million. Bill Gates, nominated Honorary Guide of the Raelian Movement a few years ago, is admirable in the way he contributes for the well being of Humanity and this is another example of his amazing dedication.
Despite the obvious good intention of the Trust and of the generous donators associated to it, there are still some individuals who prefer to see manipulation and threat for Humanity behind their actions, claiming that they want to preserve these seeds while replacing them by genetically modified ones in order to be the only ones to control the seed supply. A link to such ridiculous article is provided at the end of this article.

Rael made this additional comment:
Such article is another example of pure lies of anti-globalization fanatics disseminated through the internet. This great project of saving all living vegetal organisms (which should also be done for all animals) is just a great security if all anti-globalization fanatics succeed in exacerbating nationalisms and a world nuclear war that would terminate all life on Earth. In such a case, these vaults will make it possible to restart populating the Earth after cleaning it. It’s just a great project. We must always remember that all anti-globalization militants are just pro nationalism and pro traditions, manipulated by the militaries that are afraid to lose their job, the industries that are selling weapons, and by the traditional monotheistic religions which share the same fears.
http://www.globalresearch.ca:80/index.php?context=va&aid=7529