RAEL calls for Israelis to adopt Palestinian children and raise them as Muslims. 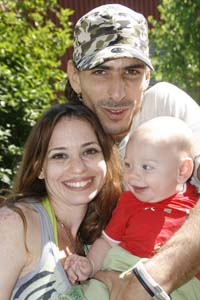 While celebrating the Raelian New Year with more than 400 European Raelians in Lendava, Slovenia, Rael formulated a special request to the Israeli Raelians amongst the participants.
“All of you, Raelians of Israel, must be the Gandhis of your country; it is your responsibility. Like Gandhi did, you should encourage Israeli parents who have lost a child through an act of war, to adopt a Palestinian child who has lost his parents from some act of war as well and raise him as a Muslim. It is the only way to show the path for peace and prevent the destruction of Israel”

Already on September 2006, Rael was calling for an Israeli Gandhi.
“Only love and sharing can save the world. 1.5 million people are dying in the Palestinian territories... Will Israel let the rest of the world save the survivors when half will be dead? Where is the Israeli Gandhi? ” On May 2007 he was warning them again “Only an Israeli Gandhi can save the state of Israel from destruction,” stepping up a warning mentioned in his book “Intelligent Design.”
Following Rael’s recommendations, a young Raelian Israeli couple decided to start the process of adoption of a Palestinian child. “When I heard Rael’s idea to bring peace in the Middle East through this adoption program, I told myself that I will be the first to do it” says Yaniv Rozenfeld who has been calling the Palestinian orphanages since then, supported by his wife Reut who is already taking care of their young child.

“To raise our own child, fully aware that he has a Jewish origin at the same time that we raise a Palestinian child, educating him according to his Muslim origin and to bring them both to an age where they can choose their own religion, knowing and respecting each other, this will be our contribution to the peace process and we believe that many Israelis will follow that direction as a majority in this country wants to live in peace.”