and a boycott of all who try to take society backward… 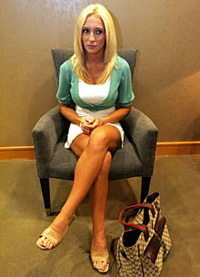 We’re sure you all heard of the Kyla Ebbert, the “too sexy to fly” 23 year old woman who is telling the media she was asked to get off a plane traveling to Tucson, Arizona this last week because her clothing was “too revealing” to travel in.

“This new attack on personal freedom fits in perfectly with the talibanization of U.S. society Osama Bin Laden has requested in his latest video,” Rael commented. “He must be rejoicing to hear that the fashion police are active not only in Saudi Arabia but right here in the West. So what’s next? Will women in the United States soon be forced to wear a burka to travel?”

“Southwestern has chosen to greatly compound what was originally just one employee’s actions by continuing to defend his outrageous and unwarranted behavior,” Rael observed. “The company should have fired him and issued an immediate apology for his behavior. But since the airline clearly has no intention of making amends to this lovely young woman, I hereby call for a worldwide boycott of all Southwestern flights. Freedom lovers everywhere must unite against this airline’s unconscionable policy.”

In the past, Southwest Airlines has been very open minded company - even posting a website which caters to gays and lesbians which tells them of other gay-friendly organizations. see here

And does anyone remember the TV ads for SW in the 70’s? The hostesses (they used the term then…hehe..) were wearing “hot pants” – little tiny shorts much shorter than Kyla’s skirt! The employees were wearing more revealing clothing than the customer 30 years ago!

So what’s happening here? An airline policy is always made in the name of profit. Tiny shorts were more appealing in the 70s to the majority of the travelers who were mainly males then. If their new policy reflects where the market is, we have indeed lots to do. The US is careening toward a theocracy. The promoters of guilt, the nudity-repulsed Christian Fundamentalists (fanatics) who have hijacked US government under the guise of conservatism and who live in fear of going to hell for sexual thoughts are no different than the “Fundamentalists” (fanatics) of Islam who want to wrap up women and keep them as baby factories. One by one, the neo-cons are trying to take away women’s rights. Whether it’s what they can wear, who they should or are allowed to marry, the right to abortion (the Bush administration is getting closer to this goal) , who they can have sex with (only after marrying a man) . But it starts with little things like how short their skirt can be. (Use your freedom or lose it ladies!!)

The only difference, for now, is that these people who equate sexuality with evil have more power in Middle Eastern countries. The west fought hard to be liberated from such oppressive forces. We should never forget that the Vatican used to have this great power and burned people at the stake, tortured them in unspeakable ways for even the smallest “violations”.

Do you have the slightest problem with what Kyla was wearing? If yes, it is interesting to find out what is really bothering you while looking at her … If no, lets join us in the boycott of Southwest Airlines… it is easy and will touch them where it hurts, in their ‘profit policy’…

On a side note, Raelians are soon organizing a “Go Topless America Day”. Check back here or on www.gotopless.org in a few weeks for updates. We’re going to be sure we exercise our freedoms so we don’t lose them. Remember! Our ancestors fought hard to break away from such primitive mindsets!