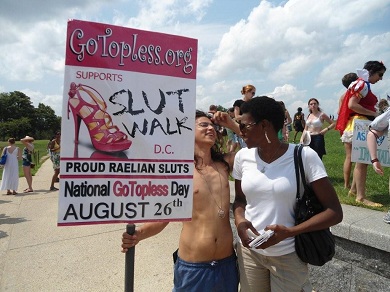 Upendra reports:
"As she took of her bra, you could feel the genuine joy and freedom in her smile....it was one woman who started it, and others simply followed. As women understood their topless rights in Washington, DC, some of them decided to practice it right away, while others were excited and relieved. It was such a wonderful time at the SlutWalk event today (Aug 11, 2012). We (GoTopless.org) were received very well in this event - both by the organizers and the crowd at SlutWalk. Many have decided to attend the National GoTopless Day on Aug 26. We are certainly looking for a bigger wave this year in DC on GoTopless Day!"