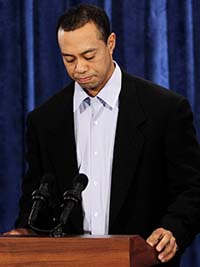 Rael has sent an open letter to Tiger Woods urging him to stop making his life a model of guilt, sadness and conformism to antiquated Judeo-Christian values. Such a model is a poor example to set for the younger generation, Rael advised the world-renowned golfer.

Some excerpts from the letter:

“Adultery is not mental disease but a very normal behavior among both humans and animals. The Hite report shows that 70 percent of women in America and 72 percent of men married for more than 5 years say they’ve had at least one extramarital sexual relationship during their lives.

“The real disease of our society is the Puritanism and politically correct Judeo-Christian conformism that almost nobody actually follows in private life. Those trying to misguide others into condemning you in a kind of public flagellation are the ones who need therapy, not you. They are judging you through the lenses of their primitive education.”

“The only person close to you who needs therapy is your wife, who enjoys the fact that you spend time talking, partying and dining with other people as long as there is no insertion of your penis. Those few inches of flesh make her feel betrayed. If she doesn’t get therapy, you will be better off divorcing such a jealous partner to freely enjoy your sexual partners. I encourage you to explore what more and more people are calling ‘polyamory,’ which means loving many people simultaneously and with no jealousy.”

“Stop saying you dishonored your sport. Your sport is one thing and your sexual life is another. In your sexual life, you don’t have to conform to any politically correct model.”

This news item is from Raelianews
https://raelianews.org/rael-to-tiger-woods-divorce-and-enjoy-polyamory.html