China and India are the best partners for Africa 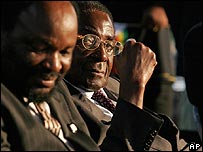 The two-day EU-Africa summit in Lisbon didn’t bring to the EU the new trading system it was hoping for. Only 15 of the 76 poor countries involved in talks have so far signed the economic partnership agreements with Europe. The President of Senegal even admitted that the majority of the African leaders have rejected these partnerships, being more inclined to deal with China.

According to the English newspaper The Independent, the Zimbabwean President Mugabe, when asked what message he had for Europe, ‘said nothing but raised his arm and made a fist’.

This comes to no surprise for the African Raelians who are actively promoting the full decolonization of the African continent, which includes severing the old economical bonds with the ex-colons.

“All African nations should reject European partnerships and work with China. One doesn’t create ties with one’s "ex"-colons who still have the same mind.”

“They – the European Nations- now panic because somebody else is taking care of what they still consider as their private garden.” he added. “China and India are the best partners for Africa as they also suffered from the same European imperialist invaders.”

Regarding Mugabe’s gesture, Rael said that his "fist " was the best possible answer.

Rael has already met many African leaders and influential counselors to discuss the United Kingdoms of Africa which would be another step towards the full political, cultural and religious decolonization of the Continent. To severe economical dependence is also part of Rael’s recommendations for the future of Africa which is promoted by the African Raelians at the highest level of their countries.

To know more about Rael’s vision on Kama ( the ancient name of Africa, before it was named so by its colons) visit www.raelafrica.org

This news item is from Raelianews
https://raelianews.org/african-nations-should-reject-european-partnerships.html