We will build the pleasure hospital 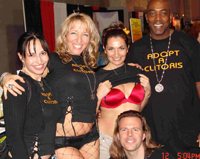 Clitoraid is a non-profit organization that was founded by Rael about 2 years ago and which started fund raising last May in order to help women who have suffered clitoris circumcision to get their sense of pleasure back and regain their dignity.
When Rael learned that a surgeon in France, Dr. Foldes, had developed a technique to have the root of the cut clitoris resurface giving the woman the possibility to feel this part of her anatomy like any woman should, he decided to help as many of them as possible to have access to this operation. Today it costs about $500 per operation which is quite reasonable for Western standards, but which can represent two years salary for some of them. Our funds will be used to build a hospital where doctors from all over the World as well as local trained surgeons can come and operate for free all those who desire to do so.
This will not only help women to feel one again, but it will tell the old women who are doing the mutilation that it is useless as we will repair them all. This is to us the best way to end this barbaric practice which prevents today 130 million women to have orgasm.
The “Adopt a Clitoris” program launched by Rael has met with success in many places. The Clitoraid team of Las Vegas was at the AVN porn convention last week and they gathered a little more than $3,000 (see video below). We need a total of $70,000 to build the hospital… If you want to help, you can donate on www.clitoraid.org

"Clitoraid is exempt from federal income tax in the USA under section 501(c)(3) of the internal revenue code. Contributions to us are tax deductible in the US under section 170 of the code."

This news item is from Raelianews
https://raelianews.org/clitoraid-at-the-avn-porn-convention-in-las-vegas.html