She is the Jewish Gandhi Israel needs badly 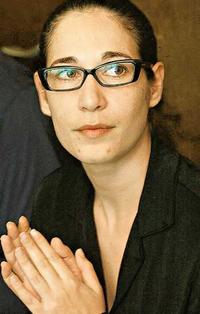 Tali Fahima, Israeli peace activist, has spent two years in jail in her country for aiding Zakaria Zubeidi, one of the most wanted gunmen in the West Bank. While he has been the target of three failed Israeli assassination attempts, she decided to be his human shield and was arrested after meeting him.

The fact that a Jewish woman had befriended the commander of the Al Aqsa Martyrs' Brigade in the Jenin refugee camp, a man accused of planning suicide bombings, was outrage in Israel when it was revealed. However in doing so, she was an example of consciousness in a violent world.

Tali Fahima is the Gandhi that Israel needs so badly.

In a recent address, RAEL said: “Even if Israel sustains some losses caused by terrorists, let’s always remember Gandhi asking to answer hatred with love. Israel needs a Jewish Gandhi... not a Bush, a Sharon or Netanyahu... In practice, and even if that brings human losses due to extremists blowing themselves up, Israel should give back all occupied territories, allow the return of Palestinian refugees and help with their economic development and the reconstruction of a Palestinian and a Lebanese State."

He added: “The only way for things to change in Israel is by sharing all American subsidies with these countries, accepting Palestinian students as well as from neighboring countries, at no charge, in all Israeli Universities, providing an education that would destroy extremism...”

This news item is from Raelianews
https://raelianews.org/israeli-activist-tali-fahima-honorary-guide-of-the-raelian-movement.html