For his Chritmas wishes to Osama Bin Laden 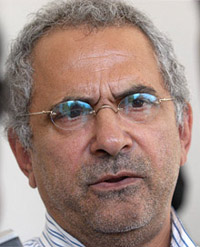 Rael has given Jose Ramos Hortas, Prime Minister of East Timor, the title of Honorary Guide of Humanity for his message to Osama Bin Laden aired on December 23rd on the BBC where he encourages the Al Qaeda leader, to extend the love and compassion he shows for his Muslim brothers and sisters to the whole World, to Europeans and to Christians.

Rael added “Jose Ramos Hortas’s message of peace and compassion is the opposite of the demonization and dehumanization spread by leaders like Bush and Blair who incite only hatred, and totally forget that even behind the worst criminal, there is a human being. In doing so while pretending that they are Christians, they forget that the message of Jesus was a message of love, compassion, non-violence and forgiveness.”

Ramos-Horta has already been an example for his non-violent resistance to the Indonesian occupation of his tiny homeland, which won its independence in 1999 in a U.N.-sponsored ballot. The Prime Minister of Timor explained that he suffered under the occupation of his country by the biggest Muslim country in the World, and he lost brothers and sisters. Despite this, he doesn’t hate one single Muslim, he doesn't hate one single Indonesian.

The Raelian philosophy teaches absolute non-violence and love and compassion for all. Honorary Guides are selected for their actions leading Humanity towards a higher consciousness. Jose Ramos Hortas said that he hopes that his words have touched the conscience of Osama Bin Laden. We believe that his words and his great example of compassion have reached many more and the Raelians of the World are happy to welcome him amongst their Honorary Guides.

This news item is from Raelianews
https://raelianews.org/jose-ramos-hortas-new-honorary-guide-of-the-raelian-movement.html