It is time to stop applying \"go forth and multiply\" 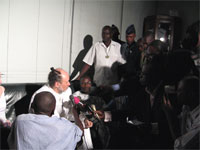 Following the declaration from Vatican-based Cardinal Alfonso Lopez Trujillo who told a Catholic magazine that stem-cell research was "the same as abortion" and that excommunication should apply to "all women, doctors and researchers who eliminate embryos", RAEL, spiritual leader of the Raelian Movement, made the following statement :

"All scientists involved in stem-cell research and IVF are welcome in the Raelian Movement if they are excommunicated by the Catholic Church, because not only is their research not a sin in the eyes of our creators the Elohim, who are called "God" by the Catholics, but it is so good that they will be rewarded for what they did by being accepted in to "heaven", the planet of eternal life. The Elohim ("God") not only support stem-cell research, to help cure all diseases and IVF to help people to have children, but also everything which fights the worst enemy of humanity: overpopulation. This includes abortion and birth control."

RAEL also added: “Traditional Christian religions are trapped in their old biblical commandment of ‘Go forth and multiply’ (Gen. 1:28). Even if overpopulation becomes a catastrophe, they don’t have the power to overrule this commandment coming from ‘God’, hence their eagerness to fight any form of birth control. Even if one day, overpopulation is such that we cannot feed everybody, and it is already the case in many countries, Christians will be against birth control and forced to stay that way. Only a Prophet sent by ‘God’ (the Elohim) has the power to amend this commandment and ask human beings to stop 'going forth and multiplying’. This is partly the reason why I have been sent at this time with this new commandment from 'God' (the Elohim) which is: "Stop going forth and multiplying excessively; control the birth rate so that the global population does not increase in number anymore."

This news item is from Raelianews
https://raelianews.org/stem-cell-scientists-welcome-in-heaven-says-rael.html