Geniocracy is the solution

To avoid a democratically vitrified world 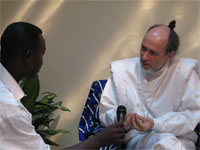 The Islamic resistance movement Hamas seems to have achieved a stunning win in the Palestinian parliamentary election on Wednesday. According to preliminary results, Hamas won 76 seats giving them a majority in the 132-seat chamber. A democratic election has put pro-war people at the head of the Palestinian State.

Here is what the Prophet Rael said today:

This is exactly as I predicted it a long time ago. We arrive at a point where there is an unsolvable conflict between "democracy" and peace.
The so-called "civilized world" believed and claimed that democracy necessarily brings peace...but free elections in Palestine prove that democracy can put in power pro-war people. It was the case a long time ago with Adolf Hitler... now we see it again. And we will soon see it again in Iraq and in many other countries....


This news item is from Raelianews
https://raelianews.org/geniocracy-is-the-solution.html