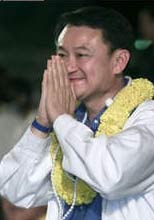 Prime Minister Thaksin Shinawatra called for making folded-paper birds that are a symbol of peace throughout Thailand. They were made in every place including schools. Thai people folded each bird wishing remission and peace in the southern part of Thailand. They made about 100 million folded-paper birds in all, 100 million birds of love and peace.
It was a moment when all the Thai people became one and thought about peace and love. Surprisingly, they spread the symbol of love and peace from dozens of military aircrafts above the southern part of Thailand.

For this reason, Thaksin Shinawatra has been named Honorary Priest for this campaign.