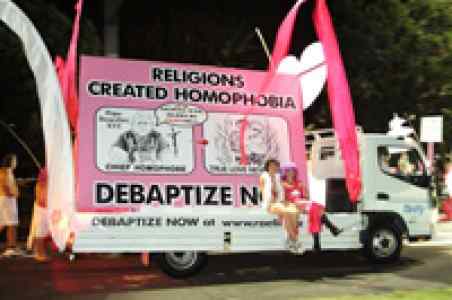 ARAMIS Raelians always made a big impact during Sydney Mardi Gras.
In 2012 and 2013 ARAMIS has presented actions highlighting concerns about the direction of the Sydney Mardi Gras, which has been the annual equivalent of the Pride march in one of the world’s gayest cities but for two years in a row the Sydney Mardi Gras has rejected the ARAMIS slogan, “HOMOPHOBIA is criminal Bible bullshit”. Therefore ARAMIS hasn’t had a float in the annual Parade but we decided to stand by our slogan or make it even more confronting with a Debaptism ceremony.

The ARAMIS Debaptism Ceremony processed from the front of St Mary’s Catholic Cathedral through Hyde Park in the middle of Sydney to the Parade gates. Rose petals marked our journey and made a beautiful statement. Our ceremony engaged with many people and there were a number of debaptisms and great interest in our action. ARAMIS actions are having an impact.
In its 35th year, Sydney Mardi Gras (formerly the Gay and Lesbian Mardi Gras) is going through a crisis in direction. It changed its name two years ago, which has caused a big outcry. It remains to be seen if the name will be restored. Financial forces are compromising the Parade and watering down the messages of the Gay, Lesbian, Bisexual, Transgender, Queer (GLBTQ) communities.
ARAMIS is concerned that the voices of the GLBTQ communities, especially in protesting about religious intolerance, are being gagged. The gay pride Parade which started out as a protest and a demonstration demanding equal rights and sexual liberation is being hijacked by corporate interests, with apparent influence from religious bodies.